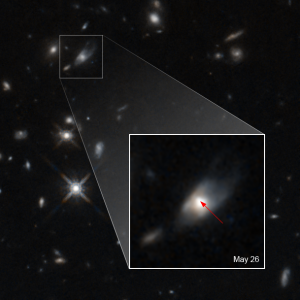 this image shows the glow from a kilonova caused by the merger of two neutron stars. the kilonova, whose peak brightness reaches up to 10,000 times that of a classical nova, appears as a bright spot (indicated by the arrow) to the upper left of the host galaxy. the merger of the neutron stars is believed to have produced a magnetar, which has an extremely powerful magnetic field. the energy from that magnetar brightened the material ejected from the explosion.
Credit: NASA, ESA, W. Fong (Northwestern University), and T. Laskar (University of Bath, UK)

Maunakea, Hawaii – Astronomers have discovered the brightest infrared light from a short gamma-ray burst ever seen, with a bizarre glow that is more luminous than previously thought was possible.

Its half-second flash of light, detected in May of this year, came from a violent explosion of gamma rays billons of light-years away that unleashed more energy in a blink of an eye than the Sun will produce over its entire 10-billion-year lifetime.

The study has been accepted in The Astrophysical Journal and will be published online later this year. A pre-print is available on arXiv.org.

“It’s amazing to me that after 10 years of studying the same type of phenomenon, we can discover unprecedented behavior like this,” said Wen-fai Fong, assistant professor of physics and astronomy at Northwestern University and lead author of the study. “It just reveals the diversity of explosions that the universe is capable of producing, which is very exciting.”

“These observations do not fit traditional explanations for short gamma-ray bursts,” said Fong. “Given what we know about the radio and X-rays from this blast, it just doesn’t match up. The near-infrared emission that we’re finding with Hubble is way too bright.”

To zero in on this new phenomenon’s exact brightness, the team used W. M. Keck Observatory on Maunakea in Hawaii to pinpoint the precise distance of its host galaxy.

“Distances are important in calculating the burst’s true brightness as opposed to its apparent brightness as seen from Earth,” said Fong. “Just as the brightness of a light bulb when it reaches your eye depends on both its luminosity and its distance from you, a burst could be really bright because either it is intrinsically luminous and distant, or not as luminous but much closer to us. With Keck, we were able to determine the true brightness of the burst and thus the energy scale. We found it was to be much more energetic than we originally thought.”

An animation showing how a neutron star merger results in a magnetar (a supermassive neutron star with a very powerful magnetic field), accompanied by the brightest kilonova ever observed. Credit: NASA, ESA, and D. Player (STScI)

Using Keck Observatory’s Low Resolution Imaging Spectrometer (LRIS) and DEep Imaging and Multi-Object Spectrograph (DEIMOS), the team determined the burst came from a galaxy located at a redshift of z = 0.55 – quite a bit farther than the initial calculated distance.

Lasting less than two seconds, short gamma-ray bursts are among the most energetic, explosive events known; they live fast and die hard. Scientists think they’re caused by the merger of two neutron stars, extremely dense objects about the mass of the Sun compressed into the volume of a small city. A neutron star is so dense that on Earth, one teaspoonful would weigh a billion tons!

Neutron star mergers are very rare and extremely important because scientists think they are one of the main sources of heavy elements in the universe, such as gold and uranium.

Along with a short gamma-ray burst, scientists expect to see a “kilonova” whose peak brightness typically reaches 1,000 times that of a classical nova. Kilonovae are an optical and infrared glow from the radioactive decay of heavy elements and are unique to the merger of two neutron stars, or the merger of a neutron star and a black hole.

What Fong and her team saw was too bright to be explained even by a traditional kilonova. They provide one possible explanation for the unusually bright blast. While most short gamma-ray bursts probably result in a black hole, the neutron star merger in this case may have instead formed a magnetar, a supermassive neutron star with a very powerful magnetic field. The magnetar deposited a large amount of energy into the ejected material of the kilonova, causing it to glow even brighter. 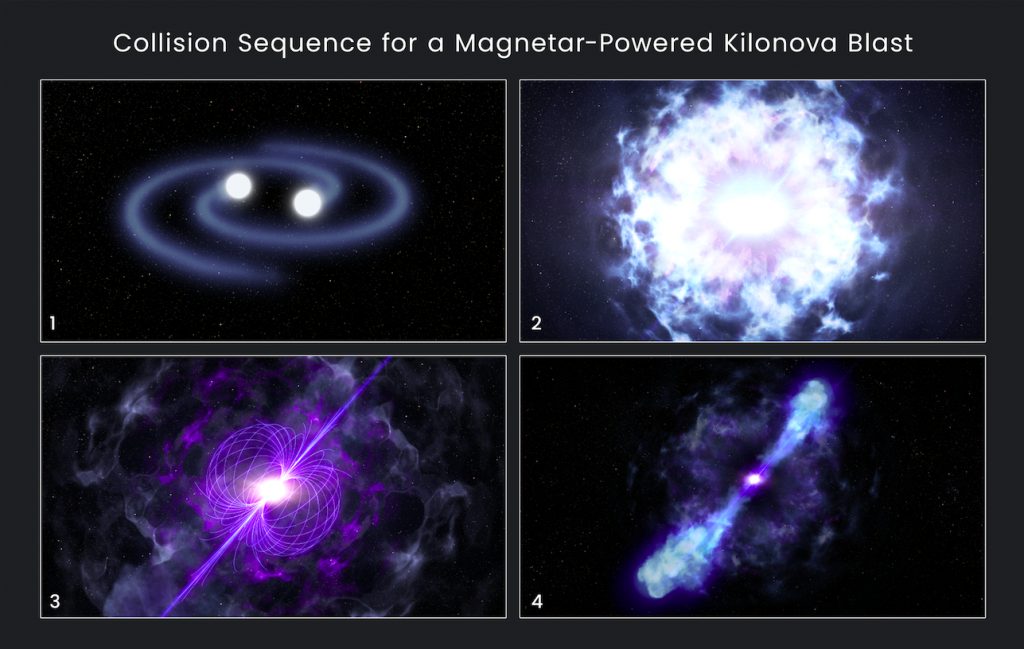 This illustration shows the sequence for forming a magnetar-powered kilonova, whose peak brightness reaches up to 10,000 times that of a classical nova. 1) Two orbiting neutron stars spiral closer and closer together. 2) They collide and merge, triggering an explosion that unleashes more energy in a half-second than the Sun will produce over its entire 10-billion-year lifetime. 3) The merger forms an even more massive neutron star called a magnetar, which has an extraordinarily powerful magnetic field. 4) The magnetar deposits energy into the ejected material, causing it to glow unexpectedly bright at infrared wavelengths. Credit: NASA, ESA, and D. Player (STScI)

“What we detected even outshines the one confirmed kilonova discovered in 2017,” said co-author Jillian Rastinejad, a graduate student with Fong’s team at Northwestern University. “As a first-year graduate student working with real-time data for the first time when this burst happened, it’s remarkable to see our discovery motivate a new and exciting magnetar-boosted model.”

With such an event, the team expects the ejecta from the burst to produce light at radio wavelengths in the next few years. Follow-up radio observations may ultimately prove the origin of the burst was indeed a magnetar. The birth of a magnetar from a neutron star merger has never definitively been seen before, as they are expected to be rare outcomes.

The short gamma-ray burst was first detected with NASA’s Neil Gehrels Swift Observatory. Once the alert went out, the team quickly enlisted other telescopes to conduct multi-wavelength observations. They analyzed the afterglow in X-ray with Swift Observatory, optical and near-infrared with Las Cumbres Observatory Global Telescope, Hubble, and Keck Observatory, and in radio wavelengths with the Very Large Array. This particular gamma-ray burst was one of the rare instances in which scientists were able to detect light across the entire electromagnetic spectrum.

“We can’t wait to combine the power of Keck and JWST along with other facilities as a team to go after even more enigmatic events like these,” said Keck Observatory Chief Scientist John O’Meara. “This study shows that we have much left to learn.”

Dr. Wen-fai Fong and several members of her research team at Northwestern University who were involved in the study of the strange short gamma-ray burst that released a surprising amount of infrared radiation – 10 times brighter than predicted for kilonovae.

The W. M. Keck Observatory telescopes are among the most scientifically productive on Earth. The two 10-meter optical/infrared telescopes on the summit of Maunakea on the Island of Hawaii feature a suite of advanced instruments including imagers, multi-object spectrographs, high-resolution spectrographs, integral-field spectrometers, and world-leading laser guide star adaptive optics systems. Some of the data presented herein were obtained at Keck Observatory, which is a private 501(c) 3 non-profit organization operated as a scientific partnership among the California Institute of Technology, the University of California, and the National Aeronautics and Space Administration. The Observatory was made possible by the generous financial support of the W. M. Keck Foundation. The authors wish to recognize and acknowledge the very significant cultural role and reverence that the summit of Maunakea has always had within the Native Hawaiian community. We are most fortunate to have the opportunity to conduct observations from this mountain.