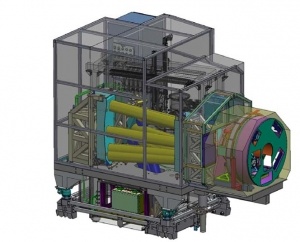 The design for the Keck Cosmic Web Imager (KCWI) includes two separate channels to detect light in the blue (350 to 560 nm) and the red (530 nm to 1050 nm) portions of the visible wavelength spectrum. KCWI-Blue was commissioned and started routine science observations in September 2017 and is obtaining superb and exciting new results while operating flawlessly.

The red channel of KCWI is called the Keck Cosmic Reionization Mapper (KCRM) and the combination of KCWI-Blue and KCRM will provide simultaneous high efficiency spectral coverage across the entire visible spectrum. Because both channels are designed to be highly configurable and have superb sky-subtraction, KCRM will be a powerful addition to KCWI, opening a window for new discoveries at high redshifts.

KCRM will significantly enhance the ability of KCWI to address a broad range of the highest priority science investigations. KCRM is ideally suited to mapping emission from Hydrogen at very high redshifts to understand the environments of the first stars that formed. KCRM will trace the fundamental hydrogen transition called Lyman Alpha to within 700 million years after the Big Bang, a time when unknown sources turned on and re-ionized all the intergalactic gas in the universe.

This reionization process is not understood at all, and remains one of the key science questions to be solved in the next decade. KCRM is ideally designed to determine the re-ionizing sources and the history of this mysterious process.

In addition to probing reionization, KCRM with its red-optimized wide-field capability will discover faint, large-scale structures at high redshifts. KCWI with KCRM will provide increased capabilities for understanding star forming regions, jets, outflows, stellar populations, and dark matter. KCRM will also make velocity measurements aimed at detecting low mass black holes. The combination of KCWI-Blue and KCRM will capture the emission from different gasses that will be used to measure ionization fractions, chemical abundance, and physics of the emission production.

KCRM will help answer the following urgent questions, along with countless others:

KCRM must be built to address the above questions, and fortunately, this project has several distinct advantages:

Although KCRM gets to take advantage of KCWI-Blue development success, KCRM will have unique technologies. KCRM requires the largest dichroic beam splitter in any Keck Observatory instrument, and it will have a red-optimized refractive camera that will transmit light to a deep-depletion CCD. This detector technology extends KCRM’s ability to detect light out to the very edge of the near-infrared spectrum with good throughput to 1,050 nm.

This technology is critical for KCRM to explore the redshift range during which the universe was re-ionized. None of these components are especially technically challenging, and preliminary designs exist for most components. Just like KCWI-Blue, we fully expect KCRM to be highly successful and to become one of the most valuable instruments that observers will use at the Keck Observatory.

The scientific promise of KCRM is demonstrated by the early and spectacular science results from KCWI-Blue. Using commissioning and the very first science observation data obtained with KCWI-Blue, many researchers are actively working on publishing papers that describe:

The two Keck Observatory telescopes are among the most scientifically productive telescopes in the world. Keck Observatory maintains its scientific leadership for a large user community by innovating and deploying pioneering instrumentation. We will continue this tradition by developing KCRM, which will enhance Keck Observatory’s ability to serve our community of observers and keep their research at the frontiers of astronomy.

The W. M. Keck Observatory telescopes are among the most scientifically productive on Earth. The two, 10-meter optical/infrared telescopes on the summit of Maunakea on the Island of Hawaii feature a suite of advanced instruments including imagers, multi-object spectrographs, high-resolution spectrographs, integral-field spectrometers, and world-leading laser guide star adaptive optics systems. Keck Observatory is a private 501(c) 3 non-profit organization operated as a scientific partnership among the California Institute of Technology, the University of California, and the National Aeronautics and Space Administration. The Observatory was made possible by the generous financial support of the W. M. Keck Foundation.

Keck Observatory wishes to recognize and acknowledge the very significant cultural role and reverence that the summit of Maunakea has always had within the indigenous Hawaiian community. We are most fortunate to have the opportunity to conduct observations from this mountain.