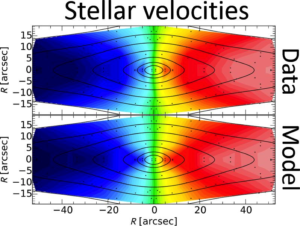 m. cappellari and the sluggs team
Example of mapping out and analyzing the speeds of stars in an elliptical galaxy. Blue colors show regions where the stars are hurtling toward the observer on Earth, and red colors show regions that are moving away, in an overall pattern of coherent rotation. The top panel shows the original data, as collected using the DEIMOS spectrograph at the W.M. Keck Observatory. The bottom panel shows a numerical model that matches the data remarkably well, from using the combined gravitational influence of luminous and dark matter.

Maunakea, Hawaii – An international team of astronomers, led by Michele Cappellari from the University of Oxford, has used data gathered by the W. M. Keck Observatory in Hawaii to analyze the motions of stars in the outer parts of elliptical galaxies, in the first such survey to capture large numbers of these galaxies. The team discovered surprising gravitational similarities between spiral and elliptical galaxies, implying the influence of hidden forces. The study will be published in The Astrophysical Journal Letters.

The scientists from the USA, Australia, and Europe used the powerful DEIMOS spectrograph installed on the world’s largest optical telescope at Keck Observatory to conduct a major survey of nearby galaxies called SLUGGS, which mapped out the speeds of their stars. The team then applied Newton’s law of gravity to translate these speed measurements into the amounts of matter distributed within the galaxies.

“The DEIMOS spectrograph was crucial for this discovery since it can take in data from an entire giant galaxy all at once, while at the same time sampling the speeds of its stars at a hundred separate locations with exquisite accuracy,” said Aaron Romanowsky, of San Jose State University.

One of the most important scientific discoveries of the 20th century was that the spectacular spiral galaxies, such as our own Milky Way, rotate much faster than expected, powered by an extra gravitational force of invisible “dark matter” as it is now called. Since this discovery 40 years ago, we have learned that this mysterious substance, which is probably an exotic elementary particle, makes up about 85 percent of the mass in the Universe, leaving only 15 percent to be the ordinary stuff encountered in our everyday lives. Dark matter is central to our understanding of how galaxies form and evolve – and is ultimately one of the reasons for the existence of life on Earth – yet we know almost nothing about it.

“The surprising finding of our study was that elliptical galaxies maintain a remarkably constant circular speed out to large distances from their centers, in the same way that spiral galaxies are already known to do,” said Cappellari. “This means that in these very different types of galaxies, stars and dark matter conspire to redistribute themselves to produce this effect, with stars dominating in the inner regions of the galaxies, and a gradual shift in the outer regions to dark matter dominance.”

However, the conspiracy does not come out naturally from models of dark matter, and some disturbing fine-tuning is required to explain the observations. For this reason, the conspiracy even led some authors to suggest that, rather than being due to dark matter, it may be due to Newton’s law of gravity becoming progressively less accurate at large distances. Remarkably, decades after it was proposed, this alternative theory (without dark matter) still cannot be conclusively ruled out.

Spiral galaxies only constitute less than half of the stellar mass in the Universe, which is dominated by elliptical and lenticular galaxies, and which have puffier configurations of stars and lack the flat disks of gas that spirals have. In these galaxies, it has been very difficult technically to measure their masses and to find out how much dark matter they have, and how this is distributed – until now.

Because the elliptical galaxies have different shapes and formation histories than spiral galaxies, the newly discovered conspiracy is even more profound and will lead experts in dark matter and galaxy formation to think carefully about what has happened in the “dark sector” of the universe.

“This question is particularly timely in this period when physicists at CERN are about to restart the Large Hadron Collider to try to directly detect the same elusive dark matter particle, which makes galaxies rotate fast, if it really exists!,” said Professor Jean Brodie, principal investigator of the SLUGGS survey.

DEIMOS (the DEep Imaging and Multi-Object Spectrograph) boasts the largest field of view (16.7 arcmin by 5 arcmin) of any of the Keck instruments, and the largest number of pixels (64 Mpix). It is used primarily in its multi-object mode, obtaining simultaneous spectra of up to 130 galaxies or stars. Astronomers study fields of both nearby and distant galaxies with DEIMOS, efficiently probing the most distant corners of the universe with high sensitivity.