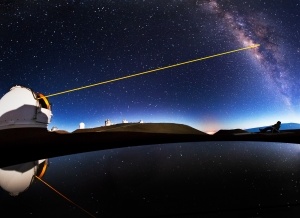 image credit: andrew richard hara, www.andrewhara.com
Adaptive optics (AO) measures and then corrects the atmospheric turbulence using a deformable mirror that changes shape 1,000 times per second. Initially, AO relied on the light of a star that was both bright and close to the target celestial object. But there are only enough bright stars to allow AO correction in about one percent of the sky. In response, astronomers developed Laser Guide Star Adaptive Optics using a special-purpose laser to excite sodium atoms that sit in an atmospheric layer 60 miles above Earth. Exciting the atoms in the sodium layers creates an artificial “star” for measuring atmospheric distortions which allows the AO to produce sharp images of celestial objects positioned nearly anywhere in the sky.

Maunakea, Hawaii – One of the most scientifically productive adaptive optics (AO) systems on Earth is getting a major upgrade, one that will further advance high-impact research on the hunt for habitable exoplanets, the supermassive black hole at the center of the Milky Way, and the nature of Dark Matter and Dark Energy.

The National Science Foundation (NSF) has awarded funding to the W. M. Keck Observatory on Maunakea, Hawaii for a significant enhancement of the performance of the AO system on the Keck II telescope.

“The Keck telescopes were the first large telescopes to be equipped with adaptive optics and subsequently laser guide stars. All major astronomical telescopes now have laser guide star AO systems. Despite this competition, Keck Observatory’s AO systems have remained the most scientifically productive in the world. This upgrade will help maintain our science community’s competitive advantage,” said Principal Investigator Peter Wizinowich, chief of technical development at Keck Observatory.

AO is a technique used to remove the distortions caused by turbulence in the Earth’s atmosphere. This results in sharper, more detailed astronomical images. This upgrade will further improve the clarity of the images formed by the telescope.

The project will deliver a faster, more flexible real-time controller (RTC), as well as a better, lower noise camera for wavefront sensing. This will reduce the camera readout and computation time between the time that an image is captured and a correction for atmospheric blurring is made.

“Any delay means the correction is applied for atmospheric turbulence that has already started to change. Even if the correction happens in just a few milliseconds, we want to reduce the delay to a minimum. The new RTC computer and camera uses advanced technology to do just that,” said Sylvain Cetre, a software engineer at Keck Observatory who plays a lead role in developing the new RTC.

Recognizing this as a valuable STEM (Science, Technology, Engineering, and Mathematics) opportunity for education and workforce development, Keck Observatory will include a postdoc as well as a Hawaii college student from the summer Akamai Internship Program to work on the development of the project.

“Part of Keck Observatory’s mission is to train and prepare future generations so the work continues long after we are gone,” said Jason Chin, a senior engineer at Keck Observatory and project manager for the new RTC. “Many of Hawaii’s finest students, scientists, and engineers end up working on the mainland away from their families. We want to show them there is a vibrant tech industry in Hawaii. One of the ways we do that is by participating in the Akamai Internship Program, which has one of the highest retention rates for Hawaii college students staying in the STEM field. We are proud that many are working in our local tech industry.”

“These instrumentation improvements will not only enhance the scientific return of our existing AO system, but it will also provide an excellent platform for future improvements,” said Wizinowich. “We were very pleased to learn that our proposal was successful.”

The upgrade is expected to be completed by the end of 2020.

The Keck Observatory community wishes to recognize and acknowledge the very significant cultural role and reverence that the summit of Maunakea has always had within the indigenous Hawaiian community. We are most fortunate to have the opportunity to conduct observations from this mountain.