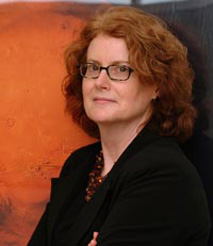 Waimea (Kamuela), Hawaii – W. M. Keck Observatory congratulates Keck Observatory Chief Scientist Anne Kinney on her appointment as the director of Mathematical and Physical Sciences (MPS), the largest department at the National Science Foundation (NSF). In her new role, Kinney will not only lead federal investments in astronomy, but in chemistry, physics, materials science, and mathematics as well.

“We are thrilled for Anne; to be a part of the NSF leadership team is an extraordinary opportunity,” said Keck Observatory Director Hilton Lewis. “While we will certainly miss Anne’s leadership at Keck, we are proud that someone from the Keck Observatory will play such an influential role in advancing the United States’ scientific aspirations. Anne’s distinguished career as a scientist and her successful track record in organizational leadership will serve her well in her new position.”

“It has been a huge honor to work with Keck Observatory’s scientific community. I have so much admiration and respect for the employees who work tirelessly around the clock to make sure each astronomer has a successful night of observing,” said Kinney. “This job has prepared me with valuable insight on how an observatory operates; the kind of visibility needed to understand the many facilities that NSF supports. I can’t thank Hilton Lewis enough for welcoming me to Keck Observatory – it has been a great privilege working with him and the entire staff.”

Her efforts have led to a new five-year Cooperative Agreement with NASA to continue the scientific collaboration between Keck Observatory and space-based astronomy missions. Under the agreement, Keck Observatory will support upcoming NASA missions, including the James Webb Space Telescope, Transiting Exoplanet Survey Satellite (TESS), and the Wide Field Infrared Survey Telescope (WFIRST).

Kinney also championed initiatives that will ensure the well-being of the science conducted at Keck Observatory. This includes updating the Observatory’s Scientific Strategic Plan, which charts the course for the next five years, as well as piloting the Keck Visitor Scholars Program, which helps prepare the next generation of scientists by giving graduate students and post-doctoral fellows hands-on experience in observational astronomy at the observatory.

Prior to her appointment to Keck Observatory, Kinney served as Director of the Solar System Exploration Division at NASA Goddard Space Flight Center. Before Goddard, she was at NASA Headquarters serving as the Director of the Universe Division in the Science Mission Directorate. Her highest accolades include the Presidential Rank Award in 2012, two-time recipient of the NASA Exceptional Leadership Award, and the NASA Medal for Outstanding Leadership. Kinney has also received several prestigious NASA Group Achievement Awards, including one for the Keck Observatory Archive.

“Kinney has successfully brought together researchers, educators, students and other partners time and again to support significant scientific and engineering feats,” said NSF Director France Cordova. “I am thrilled to welcome her to the NSF leadership team, where her skills and experience will help us maintain our position in keeping the U.S. at the forefront of scientific and technological excellence.”

“I am excited to work with NSF, an organization that lives and breathes science,” said Kinney. “I am grateful to France Cordova for the confidence she has shown me, and I look forward to working with my scientific colleagues as I expand my own expertise in NSF’s broad portfolio of fundamental research.”

Kinney will begin her NSF appointment in the new year.

The W. M. Keck Observatory is among the most scientifically productive telescopes on Earth. The two, 10-meter optical/infrared telescopes on the summit of Maunakea on the Island of Hawaii feature a suite of advanced instruments including imagers, multi-object spectrographs, high-resolution spectrographs, integral-field spectrometers, and world-leading laser guide star adaptive optics systems. The Observatory is a private 501(c) 3 non-profit organization and a scientific partnership of the California Institute of Technology, the University of California, and NASA. For more information, visit www.keckobservatory.org.