Humans are not alone in their struggle against an increasing waistline.  Astronomers believe that galaxies too put on weight throughout their lives, growing not only by consuming hydrogen gas—which is then converted to stars—but also by cannibalizing other galaxies.  It’s a galaxy-eat-galaxy cosmos, but the big surprise is that many galaxies seem to be growing to even larger sizes than their eating habits would suggest.

The gluttonous galaxies in question are known, perhaps not surprisingly, as “ellipticals.”  Their three-dimensional form distinguishes them from disk-like galaxies, including slim and beautiful spirals like M51 and our own Milky Way.  Ellipticals have long been known to be, well, fat.  They represent the most massive and brightest galaxies in the local universe, some containing more than 10 times the number of stars as the Milky Way.  But in recent years, thanks to high-resolution Hubble Space Telescope imaging and Adaptive Optics observations from Keck, astronomers have been able to spy on galaxies further and further away.  Given the finite speed of light, this is like looking back in time.  The result is a galaxy growth chart, not unlike those pencil marks our mothers drew on the kitchen wall to chart own growth.  Much to our surprise, though, the youngest elliptical galaxies we have found, observed some 10 billion years ago, appear to be more than 5 times smaller than similar ellipticals today.  This is a little like discovering that the pants you wore in high school had a waistline of only 7 inches!

You might think that ellipticals have simply fattened up as a result of their rich diet which, by the way, consists primarily of other, smaller ellipticals.  But overeating does not fully explain their growth in size.  Older ellipticals, even if they have the same total “weight” or mass as their more distant, younger cousins, are still significantly larger.  Such a phenomenon would be particularly bad news for humans since it would mean that no amount of dieting could stave off those extra inches that come with age.

What could possibly be causing aging elliptical galaxies to expand so much with time?  There are several competing theories.  The first is that our measurements or interpretation of the data are simply incorrect.  For example, perhaps our use of the brightness of galaxies as a tracer of their total mass has enabled them to “lie” about their weight.  More interesting are a variety of physical models that propose new phenomena that may affect galaxies.  This category includes the “ballooning” model which posits that a powerful energy source—-perhaps launched by the central black holes thought to reside in all massive galaxies—-expels remaining gas in recently formed ellipticals.  This removal of material causes the elliptical to quickly expand while the mass we would infer from the amount of star light stays fixed.  By removing star-forming fuel, the powerful influence of central black holes in this theory might also explain why ellipticals stop forming stars so early in their lifetimes.

Unfortunately, astronomers have had a hard time searching for signs of black hole driven outflows and do not yet understand the details of how it might work.  These problems lend support to alternative explanation for size growth that might be called the “fluffy wings” model.  Proponents of this model argue that the compact cores of ellipticals are the first to form.  But, by accreting many smaller, lower-density galaxies over time, symmetric wings of material are built up in the outskirts of the galaxy.  These fluffy wings do not significantly increase the galaxy’s mass, but do make it appear to be larger.  Confirming the build-up of wings may also shed light on the eating habits of massive galaxies, indicating that they prefer many small meals over a few large ones.  The problem with the wings model is that it may not be able to explain the full amount of growth observed. 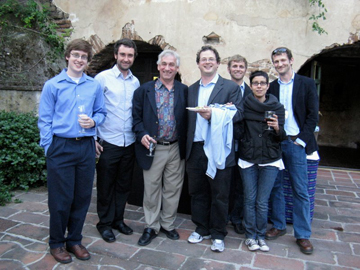 How can we distinguish between these two scenarios?  The first step would be to employ an alternate way of weighing the mass in ellipticals to verify our previous observations.  Then, if ellipticals expand uniformly with time as in the ballooning scenario, we would expect these new observations to show that they were much more dense in the past.  If they instead grow fluffy wings, we would expect their central densities to stay fairly constant.  These goals brought a team composed of Richard Ellis, Drew Newman, Tommaso Treu and myself to Keck in June 2009 and again in April 2010.  Newly upgraded red-sensitive CCDs on the Low Resolution Imaging Spectrograph (LRIS) were able to provide just the observations needed.  It was exactly this increased sensitivity at red wavelengths that could capture spectral signatures of the stellar density of distant ellipticals.  While the most distant and apparently smallest ellipticals remain highly challenging, we were able to observe a sample at a slightly later stage of evolution corresponding to a lookback time of 8—9 billion years.  Our observations have revealed important clues to what remains a fascinating mystery. 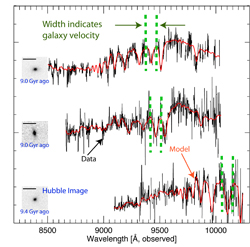 The figure shows the LRIS spectra obtained of the three most distant compact ellipticals in the sample.  Hubble images as well as the lookback time to each galaxy is shown on the left.  The LRIS data are shown in black with the best-fitting models in red.  Absorption lines are clearly detected and well fit by the models.  Their width indicates the velocity dispersion of each object, a property that increases with the mass and density of the galaxy.  An absorption line due to ionized calcium is highlighted with the green dashed lines in each spectrum and redshifts to longer wavelengths as the distance to the galaxy increases.  These are the three most distant elliptical galaxies for which Keck velocity dispersions have been measured.

To see why, it helps to understand exactly what the LRIS upgrade provided. The spectrum of a distant elliptical galaxy is essentially the sum of all the spectra of the stars living in that galaxy. Spectral features like absorption lines coming from certain atoms in stars also sum together.  But, because the stars in an elliptical galaxy zip around the galaxy’s center, each on a different orbit, these features get spread out by the Doppler effect.  If we can observe the right set of absorption features, the amount of broadening, or “velocity dispersion,” therefore tells us the typical speed of the stars in the galaxy.

What does the velocity dispersion have to do with the growth of elliptical galaxies?  Well, since the motion of stars is determined by the galaxy’s gravity, their velocities provide another indicator and an important check on other measures of the galaxy’s mass and density.  We can use the velocity dispersion to check for higher internal densities in young ellipticals, thereby distinguishing the ballooning scenario from the growth of fluffy wings.  Before the LRIS upgrade, however, the key absorption features of high redshift ellipticals remained too far to the red to be studied, making velocity dispersion measurements for young ellipticals nearly impossible.

So what did our new LRIS observations reveal?  Our sample of 17 ellipticals, observed at an average lookback time of 9 billion years, have velocity dispersions that are fairly consistent with nearby ellipticals, showing little evidence for drastically higher densities in the past.  In fact they appear to be only about two times smaller than comparable ellipticals today.  Our galaxies were observed during what you might call their college years.  Since they appear to be just a little slimmer than retirement-age ellipticals today, our observations tell us that these 20-somethings will not grow significantly in their lifetimes.  And the growth they will experience appears to be more consistent with the donning of fluffy wings than with ballooning.

The LRIS upgrade has therefore provided an important piece of the puzzle.  But in some ways the mystery has deepened.  For ellipticals just 1-2 billion years younger, deep imaging suggests much smaller sizes.  Is there a highly dramatic stage of evolution occurring just before the epoch at which our galaxies were observed?  Velocity dispersions for even more distant galaxies are now needed, but only a single tentative measurement (requiring an exposure more than 30 hours long!) currently exists.  Tantalizing but very uncertain, this one young elliptical seemed to have a very high density.  Will we be able to confirm this observation with a robust sample or have we hit the limits of even the mighty Keck telescope?  Astronomers tend to be a stubborn bunch, and our team believes that it is possible to push our Keck observations to even greater distances.  We’ll be heading back to LRIS this winter for an even more ambitious program, and in the next year a game-changing new instrument at Keck Observatory promises to take us even further: MOSFIRE.  Until then, the mystery of the expanding ellipticals will remain on our minds,  especially when we see the dessert cart go by. 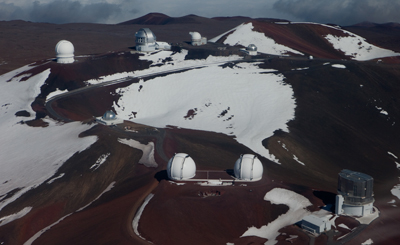