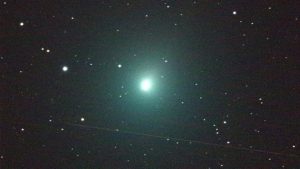 comet 46p/wirtanen made its closest approach to earth on december 16, 2018. because of its holiday timing and bright green glow, the icy visitor was nicknamed the ʻchristmas comet.’ 46p/wirtanen was just 7.1 million miles from earth, or 30 times the distance to the moon, which is the closest the comet had ever been to our planet in centuries.
Credit: NASA

Maunakea, Hawaiʻi – Comet 46P/Wirtanen was releasing an unusual amount of alcohol as it made its historic flyby of Earth two and a half years ago. That’s one of the findings from the latest published study comet detectives conducted after observing 46P/Wirtanen with W. M. Keck Observatory on Maunakea in Hawaiʻi.

“46P/Wirtanen has one of the highest alcohol-to-aldehyde ratios measured in any comet to date,” said Neil Dello Russo, a cometary scientist at Johns Hopkins University Applied Physics Laboratory and co-author of the study. “This tells us information about how carbon, oxygen, and hydrogen molecules were distributed in the early solar system where Wirtanen formed.”

Keck Observatory data also revealed a strange characteristic. Normally, as comets orbit closer to the Sun, the frozen particles in their nucleus heat up, then boil off, or sublimate, going directly from solid ice to gas, skipping the liquid phase. This process, called outgassing, is what produces the coma – a giant cloak of gas and dust glowing around the comet’s nucleus. As the comet gets even closer to the Sun, solar radiation pushes some of the coma away from the comet, creating the tails.

With comet 46P/Wirtanen however, the team made a strange discovery: Another process beyond solar radiation is mysteriously heating up the comet.

“Interestingly, we found that the temperature measured for water gas in the coma did not decrease significantly with distance from the nucleus, which implies a heating mechanism,” said co-author Erika Gibb, professor and chair of the Department of Physics and Astronomy at University of Missouri–St. Louis.

Gibb says there are a couple possible explanations. One is a chemical reaction where sunlight may be ionizing some atoms or molecules in the dense coma close to the nucleus, releasing high-velocity electrons. When these super-charged electrons collide with another molecule, they can transfer some of their kinetic energy and heat the water gas in the coma.

“Another possibility is there may be solid chunks of ice flying off of 46P/Wirtanen,” said Gibb. “We’ve seen this in some comets visited by spacecraft, notably Hartley 2 during NASA’s EPOXI mission. Those ice chunks tumble away from the nucleus and sublimate, releasing energy further out in the coma.”

This scenario would be consistent with observations of other hyperactive comets like 46P/Wirtanen – a class of comets that release more water than expected if they release all of their gases directly from their icy nuclei as they approach the Sun. The water spews in the form of gas but can condense later into liquid if it were to arrive on a planet’s surface. This is why scientists suspect comets, as well as asteroids, may have delivered the water that makes up Earth’s oceans.

Keck Observatory data did show Comet Wirtanen exhibited relatively more water molecules farther out in the coma after sublimation compared to other molecules – namely ethane, hydrogen cyanide, and acetylene. This suggests that additional water is being released from icy grains in the inner coma, which is a signifcant result coming from a ground-based telescope. Such observations have been made with spacecraft visiting other comets but can be difficult to study from the ground because of interference from water in Earth’s atmosphere. To address this, ground-based studies have utilized a technique to target water transitions that are not blocked by the atmosphere; this makes it possible to obtain detailed infrared observations from Keck Observatory that show how the most abundant volatile element is distributed within the coma of a comet.

In the Nick of Time

NASA awarded the researchers telescope time to observe 46P/Wirtanen in December 2018 using Keck Observatory’s Near-Infrared Spectrograph (NIRSPEC), which was upgraded just in time to capture the comet as it made its closest approach to Earth.

“Our research would not be possible without the efforts of the entire team that completed the NIRSPEC upgrade,” said lead author Boncho Bonev, physics research associate professor at American University. “I am so grateful for their tremendous and successful effort to complete NIRSPEC’s major upgrade under immense time pressure.”

“Within just 10 to 20 minutes of observing with NIRSPEC, we obtained measurements of the abundances and spatial distributions of the comet’s chemical building blocks,” said co-author Mohi Saki, a graduate research assistant at the University of Missouri-St. Louis Department of Physics and Astronomy. “Detecting minor species such as ammonia and acetylene can take hours with other instruments, even for comets as bright as 46P/Wirtanen. We can’t replicate NIRSPEC’s level of sensitivity for minor species with any other near-infrared instrument in such a short time scale.”

Full results from the study are published in The Planetary Science Journal. 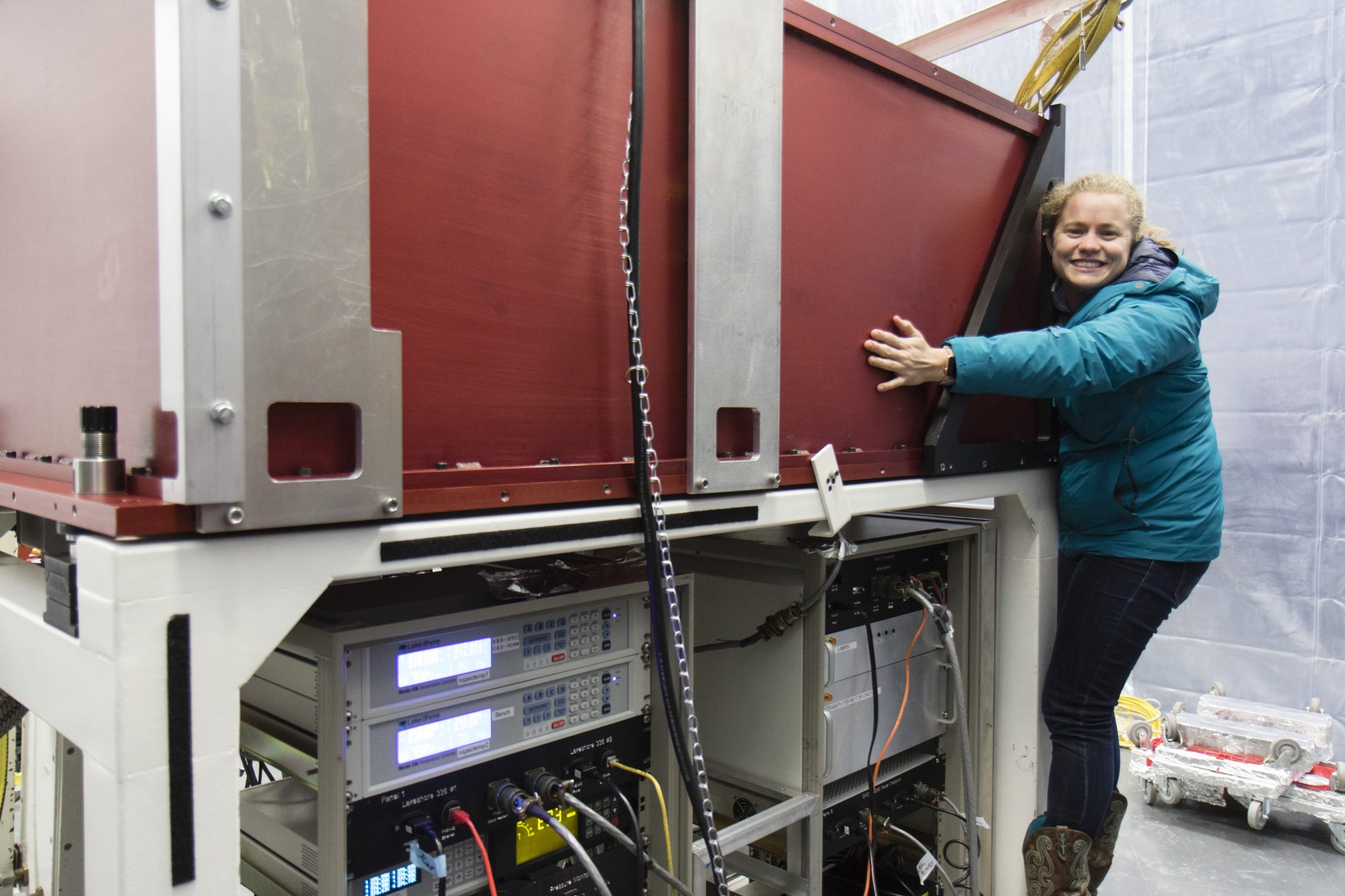 Bonev’s team continues to dissect the data, and all information obtained from their 46P/Wirtanen research will help determine if there are grounds for a future space mission to conduct follow-up observations of the comet.

“The molecules we focused on had never been studied in the past in this particular comet,” said Bonev. “These Keck observations provided one of the very best data sets ever obtained by a ground-based observatory in the class of comets to which 46P/Wirtanen belongs, the so-called Jupiter-family comets. This is important because it will help the science community evaluate whether a spacecraft mission to Wirtanen could yield more valuable insights about the comet and the early solar system.”

Analyzing the composition of comets is important to understanding the early solar system. These frozen dirtballs of gases, rock, and dust that orbit the Sun are relics of our cosmic past, with ice fossils containing the original minerals from which the solar system formed. Comet scientists are like archeologists, using comets to piece together the solar system’s history.

“Comet studies like this are exciting because they serve as a launchpad for answering the million dollar question – are we alone?” said Greg Doppmann, staff astronomer and NIRSPEC instrument scientist at Keck Observatory. “The organic compounds on comets tell us what ingredients formed our solar system and served as precursors to life. We can then look for these same prebiotic molecules in other planetary systems, which opens an exciting door to the very real possibility of finding microbial life beyond Earth – not in our kids’ lifetimes, but our own lifetime.”

Funding and support for this research is provided by NASA and the National Science Foundation.

The W. M. Keck Observatory telescopes are among the most scientifically productive on Earth. The two 10-meter optical/infrared telescopes atop Maunakea on the Island of Hawaiʻi feature a suite of advanced instruments including imagers, multi-object spectrographs, high-resolution spectrographs, integral-field spectrometers, and world-leading laser guide star adaptive optics systems. Some of the data presented herein were obtained at Keck Observatory, which is a private 501(c) 3 non-profit organization operated as a scientific partnership among the California Institute of Technology, the University of California, and the National Aeronautics and Space Administration. The Observatory was made possible by the generous financial support of the W. M. Keck Foundation.The authors wish to recognize and acknowledge the very significant cultural role and reverence that the summit of Maunakea has always had within the Native Hawaiian community. We are most fortunate to have the opportunity to conduct observations from this mountain.