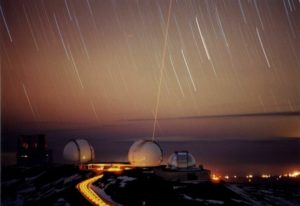 john mcdonald, canada-france-hawaii telescope corp.
A very faint beam from the Keck sodium laser appears in this 20-minute exposure. The laser creates a "virtual" star high above the Earth’s surface, which is not visible to the human eye, but is bright enough to guide high resolution adaptive optics at Keck. Taken from 600 meters away, hazard lights from a vehicle mark the steep descent path of the summit, and the motion of the Earth has created star trails in the sky.

MAUNA KEA, Hawaii (January 4th, 2002) The W. M. Keck Observatory, home to the world’s two largest telescopes, and the Lawrence Livermore National Laboratory (LLNL) have created a “virtual” guide star that will greatly increase the ability of the Keck II telescope using adaptive optics to resolve fine details of astronomical objects. Installed in 1999, the Keck adaptive optics system has enabled astronomers to minimize the blurring effects of the Earth’s atmosphere, producing images with unsurpassed detail and resolution. The adaptive optics system uses light from a relatively bright star to measure the atmospheric distortions and to correct for them, but only about one percent of the sky contains stars sufficiently bright to be of use. The new virtual guide star will enable Keck astronomers to study nearly the entire sky with the high resolution of adaptive optics.

The virtual guide star, which achieved “first light” on December 23, was created using a 20-watt dye laser to illuminate a diffuse layer of sodium atoms that exists 60 miles (95 km) above the Earth’s surface. When activated by the laser, the sodium atoms produced a very small source of light, less than 3 feet (1 meter) in diameter, which allowed the adaptive optics system to measure the distortions of the atmosphere. The resulting virtual star was measured at 9.5 magnitude, about 25 times fainter than anything that can be seen by the unaided eye, but bright enough to operate the adaptive optics system. The star appeared orange, the familiar color of common low-pressure sodium vapor street lights. The laser guide star system was funded by the W. M. Keck Foundation, with additional funding provided by the National Aeronautics and Space Administration (NASA) and the National Science Foundation’s Center for Adaptive Optics (CfAO). It was developed in collaboration with the Lawrence Livermore National Laboratory (LLNL).

Adaptive optics refers to the ability to compensate or adapt to turbulence in the Earth’s atmosphere, removing the blurring of starlight. Adaptive optics systems measure the distortions of the light from a star and then remove the distortions by bouncing the light off a deformable mirror that corrects the image several hundred times per second. With the Keck adaptive optics system, astronomers are obtaining infrared images with four times better resolution than those produced by the Hubble Space Telescope, which orbits high above the Earth’s atmosphere. Many significant discoveries have already been attributed to Keck adaptive optics, and the Keck laser guide star system will lead to many more.

“We asked for an early present this year, and just before Christmas we were given a virtual star that will dramatically increase the research capabilities of the world’s largest telescope,” said Dr. Frederic Chaffee, director of the W. M. Keck Observatory. “This effort could not have been possible without the talent and dedication of our adaptive optics and laser guide star teams. We couldn’t be happier with these results, and we look forward to fully integrating the laser with our adaptive optics system by the middle of 2002.”

The Keck virtual guide star system consists of a dye laser that is used to produce light with the wavelength of the atomic sodium resonance line at 589 nm. The 20-watt output of the dye laser is projected out of a 20-inch (50 cm) lens attached to the side of the 10-meter Keck II telescope.

“We have seen lasers develop into powerful tools in fields ranging from medicine, to laser printers to compact disc players. Our new virtual guide star marks the start of a new era, when we’ll see lasers contributing to astronomy as well,” said Claire Max of LLNL, principal investigator for the Keck laser project and professor of astronomy at the University of California at Santa Cruz.

The main components of the Keck adaptive optics system are a wavefront sensor camera, a fast control computer and a deformable mirror. The wavefront sensor camera measures distortions due to atmospheric turbulence using light from the guide star. A control computer computes the wavefront distortion up to 670 times a second and sends commands to the deformable mirror. The deformable mirror, about six inches (15 cm) in diameter, is made out of a thin sheet of reflective glass controlled by 349 actuators that can adjust the shape of the mirror by several microns, a distance large enough to correct for atmospheric distortions.

Support for the Keck virtual guide star adaptive optics program is provided in part by scientists at the Center for Adaptive Optics (CfAO), a national center devoted to the advancement and application of astronomical adaptive optics technology. Headquartered at the University of California, Santa Cruz, the center is engaged in research, education, instrument development, and the dissemination of knowledge about adaptive optics to the broader scientific community. Additional information is located at the CfAO Web site at http://cfao.ucolick.org/.

The Keck virtual guide star system is the world’s most powerful laser currently in use at an astronomical telescope. The laser was developed by the Lawrence Livermore National Laboratory (LLNL) and LLNL staff from the Laser Science and Technology Program of the National Ignition Facility Directorate played a key role in the deployment of the laser at the telescope. LLNL is a national security laboratory with a mission to ensure national security and apply science and technology to the important issues of our time; advanced lasers represent one of the Laboratory’s core technology areas. LLNL is managed by the University of California for the U.S. Department of Energy’s National Nuclear Security Administration. For more information visit the LLNL Web site at http://www.llnl.gov/.

The W. M. Keck Foundation provided the bulk of the capital to build the two 10-meter telescopes as well as the adaptive optics and laser guide star systems. The W. M. Keck Foundation is one of the nation’s largest philanthropic organizations, focused primarily on the areas of medical research, science, and engineering. The Foundation also maintains a program for liberal arts colleges and a Southern California Grant Program that provides support in the areas of civic and community services, health care and hospitals, precollegiate education, and the arts. For more information, visit the Foundation’s Web site at http://www.wmkeck.org/.

The W. M. Keck Observatory, operated by the California Association for Research in Astronomy (CARA), provides astronomers from associated institutions access to two 10-meter telescopes, the world’s largest. Each telescope features a revolutionary primary mirror composed of 36 hexagonal segments that work in concert as a single piece of reflective glass to provide unprecedented power and precision. Each telescope stands eight stories tall and weighs 300 tons, yet operates with nanometer precision. The observatory is operated by the California Institute of Technology, the University of California, and the National Aeronautics and Space Administration (NASA), which joined the partnership in October, 1996. For more information, visit the W. M. Keck Observatory Web site at http://www2.keck.hawaii.edu:3636/ or send e-mail to: www@keck.hawaii.edu.